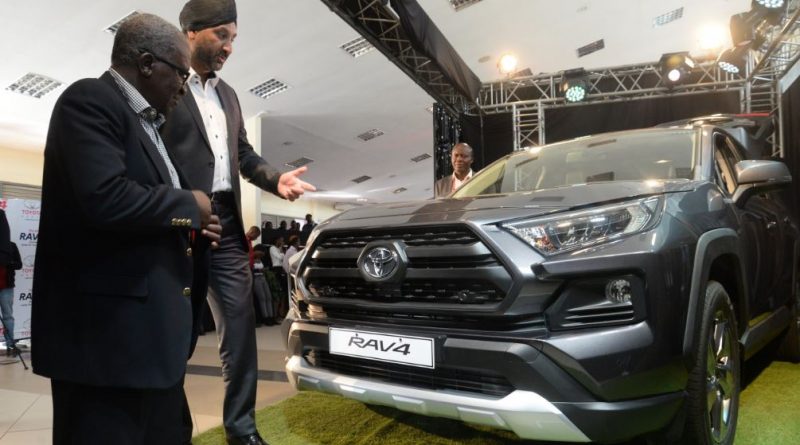 Toyota Kenya has today introduced the 5th-generation Toyota RAV4 in the Kenyan market. The new Robust Accurate Vehicle with 4 Wheel Drive (RAV4) model brings a new era of improved performance, capability and safety in the automobile industry. Speaking during the launch, Toyota Kenya Managing Director Mr. Arvinder Reel said the new RAV4 aims to stimulate the curiosity of customers inspiring their desire to try something new and to experience the joy of driving anywhere, anytime, and as far as they want. “The RAV4 has been a long-time market leader in the urban passenger SUV market and it remains one of our key mass production models. With the fifth generation of our RAV4 model, the vehicle has come full circle and we can confidently say that the all-new RAV4 is indeed evolved and ready for anything that the future holds.”

The all-new 2019 RAV4 banks on its upgraded, more premium design paired with better performance and capability. Based on creating a Robust Accurate Vehicle with 4 Wheel Drive, the new RAV4 development concept blends the power and sophistication of an SUV, achieving top-class generous rear cargo space and outstanding driving performance realized by a new 4WD system.

Redesigned to reflect our futuristic vision, the new Toyota RAV4 comes with a variety of updates including a stylish new look, a new engine and added safety and technology features. The fifth generation RAV4 also comes with a 2.5-liter engine that produces 207 horsepower. The ingenuity of the new model lies in the fact that despite its enhanced power, the vehicle is more fuel efficient. The new engine plus a lighter curb weight compared to previous versions help the new RAV4 achieve the most fuel-efficient performance among its peers.

The all-new Rav4 aims to highlight urban adventure at its finest. Styled with a sportier design, the RAV4 allows the driver to bravely take on the exciting roads at any time. Noting that customer safety plays a major role in the Toyota business, the new vehicle comes equipped with Dynamic Torque Vectoring AWD system which automatically senses what the terrain the vehicle is on and how much torque is needed to wheels to ensure stability, achievement of high 4WD handling, stability, and off-road performance and this resulting in improved fuel efficiency. It also has Stability control which automatically senses when the vehicle’s handling limits have been exceeded and reduces engine power and/or applies select brakes to help prevent the driver from losing control of the vehicle.

For passenger safety, the RAV4 comes with front-impact airbags, side impact airbags and overhead airbags as well. It also has a Security system and the vehicle is equipped with an ignition disable device that will prevent the engine from starting if the correct original manufacturer key is not used.

The first-generation RAV4 debuted in 1994, when body-on-frame four-wheel drive vehicles were positioned as off-road vehicles. Since then the RAV4 has played play a pivotal role in the development of a new market for the passenger-friendly sport utility vehicle (SUV/crossover). “The launch of the 2019 model is a show of Toyota Kenya’s continued efforts towards changing the SUV landscape in Kenya with better technology and increased driver comfort,” added Mr. Reel.