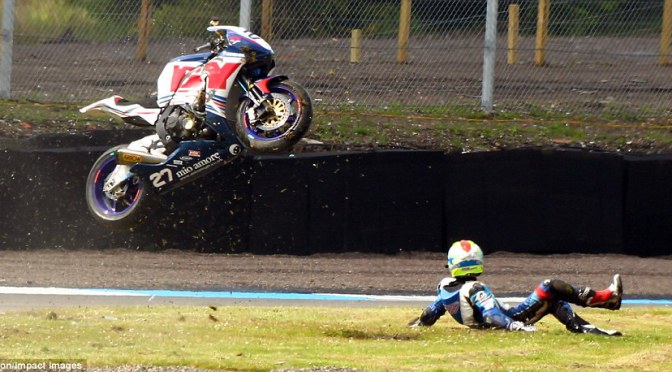 From popular culture, literature, to the extensive movies and television shows, bikers have always been portrayed as the stereotypical bad boys, totem for rebellion, risk takers and by and large, very cool.

With a history that dates back to the 19th century and largely dominated by men, biking, undertaken both as a sport and a hobby has mostly been done for the chase of the thrill. For a biker, there is something satisfying and exhilarating about knowing that he has so much speed at his disposal at the touch of a button or the rev of an engine.

Still at its infancy stage in Kenya, biking is a hobby passionately practised by many during the weekends and in their free time. Just a pastime for now, it has turned out to be quite the spectacle that’s managed to draw huge crowds, even warranting the closure of some roads in the city to serve as tracks.

As evidenced by the leather vests and do-rags at this year’s Superbike Championship, the biking culture is gradually growing something that is still fascinating and exciting to those catching up with the frenzy.

Contrary to the negative perception that is associated with mean looking, diehard bikers, the championship, held at the Industrial Area was a pretty flashy event that boasted of some high-end bikes ranging from prestigious Ducati superbikes to the coveted Cruiser Harley Davidson.

The first of its kind in Kenya and designed for on-road motorcycles known as superbikes, The Superbike Championship made its debut last year in September in Ruiru, Kiambu County.

Anyone who has taken a ride on a motorcycle - not a boda boda - talks of simultaneously experiencing excitement and panic. This is a completely different feeling from riding in a car with windows and sunroof open or the convertible top down.

That feeling is just an inkling of what bikers experience and is perhaps what they call flying without wings. So, what is great about motorcycles and bikers anyway?

LIVING ON THE EDGE

Living on the verge of being an organ donor has its perks. For starters, bikers instantly earn cool points and attention whenever they show up.

However, John Kavekye, a cruiser and member of the Cruzin Kings MC who shies away from being labelled as an adrenaline junkie, being cool and seeking attention is not his appeal for riding.

“Freedom, enjoying the beautiful countryside and meditating” are his reasons for riding. Bikers, especially cruisers enjoy the feeling of being on an open road without the nuisance of traffic and taking in the scenery in the countryside while on a road trip.

They could certainly do without the smell of choking exhaust fumes of a diesel pick-up truck. The relaxing feeling they get at the end of the day is worth every risk that may be associated with biking.

Cruisers and speed bikers were the main attraction at the event and immediately differentiated themselves by the kind of motorcycles they ride. They are also set apart by their beliefs and purpose for riding.

While cruisers, who possess bigger and louder motorcycles enjoy an easy ride and do it for the sole purpose of luxury and charity, speed bikers are no doubt adrenaline junkies and fierce competitors.

As riding continues to expand into being a bigger luxury and sporting activity, the biking fraternity is firmly taking root with more teams and clubs like the Cruzin Kings MC coming up. Prospective members require a riding licence and are vetted based on their ethics and morals to make it a respectable part of sports.

Bikers in Kenya have broken the greasy, evil looking, mean and raunchy type of people stereotype that came about thanks to gangs like Hells Angels, Outlaws and Sons of Satan MC.

The Wild One, a 1953 American outlaw biker film starring Marlon Brando is credited as having started the whole biking frenzy.

Unlike the American biker gangs, the Kenyan bikers are people with reputable day jobs who take up riding as a hobby; family people just looking for fun and adventure.

David Karuri, known as Blade Doc on the tracks is a surgeon by profession and an excellent racer.

On the surface, the two may seem like conflicting principles but to him they might as well be compatible.

“Riding teaches and gives me concentration, precision, stamina, patience, focus and knowing my limit. I carry the same values forward in my work,” he says. Karuri remarks that riding keeps him sane because he sees so much pain at work and riding is the only way he gets it all out.

Still, the stereotype that speed bikers are adrenaline junkies holds true. It is accurate to say that on a motorcycle you are more vulnerable and committed bikers have accepted this accordingly. Nothing says I’m invisible like weaving in and out of a sea of cars.

The risk that comes with riding is inherent therefore gaining experience that will help a rider manoeuvre through traffic is of the utmost importance and a skill that is a long term attraction of riding.

Like any other sport, riders get their fair share of attraction: men who covet the motorcycles and women who ogle at the riders. Guys on motorcycles have that extra oomph; they exude independence, self-reliance and fearlessness, that kind of vibe always works its magic on the female species.

Bikers thrive on spontaneity. A guy with a bike is no doubt the sort of person who is likely to say “let’s go for a ride” on the spur of the moment. He has the advantage of speed and convenience, and if the mood strikes him, he could well be on his way to Machakos, Namanga or Naivasha on a whim.

Bikers might be the only people who manage to look intimidating and cool at the same time. As much as they do not dress up for the purpose of looking intimidating, they do not do it to look fashionable either.

But the end result is instant style. It is hard not to look and stare at a rider dressed in branded protective gear revving up his engine about to zoom past you.

Boots, chaps, leather vests and jackets, gloves, huge jangling key rings attached at the belt loop, bandana head pieces or skull caps and goggles are all protective gear but extremely fashionable all the same. Albeit too much leather, it is better to leave a layer of cow hide on the pavement rather than their own.

Riding comes with a great amount of personal risk, but it also special, alluring and interesting because it comes with freedom and a shared sense of community among riders. Hopefully, this is something that we are about to see more of as bikers take the fun and their championships from city to city and county to county.