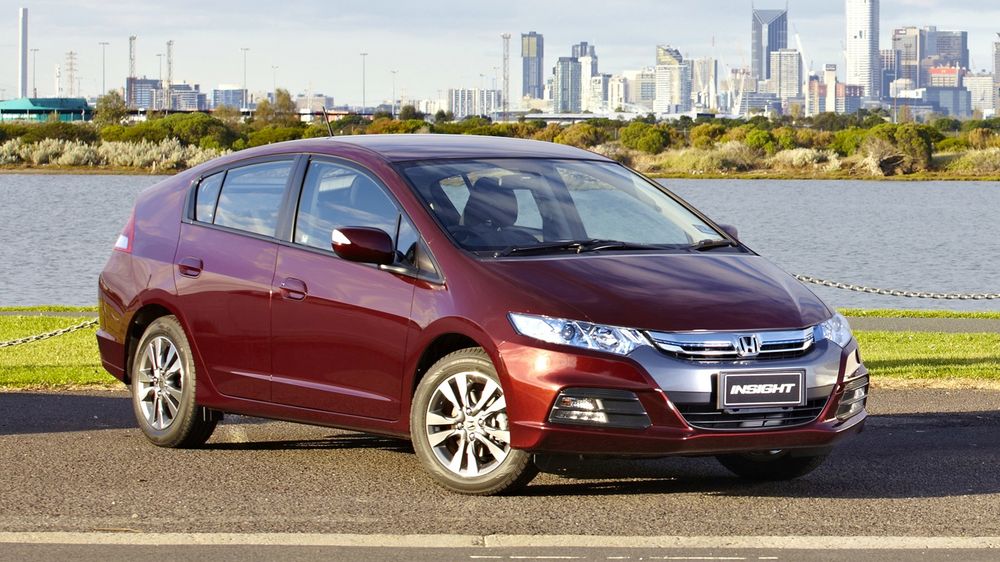 Last week I drove a hybrid for the very first time.The odds are most readers of this article haven't driven one either. There are some people driving hybrids, but these are few and spread out.

Think about the last time you saw or drove a hybrid and it’s very likely that you can’t because you didn’t. I was particularly ashamed that I had never driven a hybrid or electric vehicle. This meant I could not publicly rant on the merits, or otherwise, of hybrids. And then I got the keys to a 2010 Honda Insight, the arch nemesis of the Prius.

L Exterior For a start it has the same wedgy shape as the Prius. I don’t find either design appealing. I have seen more stylish photocopier machines and in the right light, a stapler is more visually arresting than the Insight. It has been designed to stand out, which it does, regrettably by its clinical appearance.

But its blandness is not without purpose. The steeply sloped windshield and A-Pillar allow for an almost seamless transition from the roofline to the rear ast week I drove a hybrid for the very first time. The odds are most readers of this column haven’t drivwindow where a boot-wide rear light underlines the almost vertical high reaching boot lid.

Taking into account rear passenger headroom and maximum aerodynamic efficiency, both the Prius and Insight come to the same boring conclusion. In terms of design you can buy either and nobody would tell which is which.

Interior I was disappointed by the exterior but kept optimistic about the control deck of the Starship enterprise. I was served up more disappointment as the inside featured a conventional key and start button, a normal automatic gear selector, and a normal steering wheel. It all feels so normal that I suspect some of you may think you have never been in a Hybrid but were in an Insight and didn’t notice the difference. This undoubtedly was an attempt to smooth transition for people who may not immediately be inclined to the alternative hybrid lifestyle and worked to some extent according to initial sales figures.

Peer through the three spoke steering wheel, at the lower of two display consoles where you get the fuel and tempera ture gauges, rev-counter and trip meter. Above that you get a digital speedo superimposed on a blue-green economy gauge. It feels refreshingly geeky but with the conventional cabin and hard to love exterior, it’s just not enough.

Driving The IMA - Integrated Motor Assist - is a simple approach to hybridisation. You get a 1.3-litre engine, which produces 87 conventional horsepowers and an electric motor that produces 14 more of the electric kind. All this power is directed to the front wheels via a CVT transmission. So, a total of 97 horsepower is served very differently.

As the little engine and the transmission are permanently connected, the car can’t get off the line on electric power alone.

It can then move on electric power once it gets going. Other hybrid systems can also disconnect the engine completely, making the permanently connected set up less efficient.

Delicately, is how the Insight should be driven. Think of it like seducing an irritable girl, anything even slightly aggressive will be responded to with unimpressive engine vocals and a high spinning CVT. It’s unrefined and lazy in matters of speed and I suspected, didn’t appreciate my lead foot. Instead, switch to eco mode and you can almost feel it relax. The irritable gearbox settles down and eases out the throttle map, improving driveability, albeit at a slight cost in performance.

Unfortunately the Insight would prefer smooth roads to accompany your smooth driving. It was jarring on many of the surfaces I drove on. Any imperfection of the road is amplified by the Macpherson struts in front. The car should, in essence, be giving us a glimpse of a better, more comfortable ride in future.

But it’s not all bad. The steering, although lacking any kind of feel, is dead on accurate. It may be a bit on the lighter side but it makes the whole car nimble and responsive. The crisp handling defying hybrid stereotypes and may even be described as mildly enjoyable.

Unfortunately I didn’t have the car long enough to test the consumption credentials over a conventionally powered rival. I suspect that despite the owner’s insistence on great mileage, it may not be good enough to justify the whole hybrid narrative.

My issue with the Insight is that it doesn’t seem to do enough. It’s a bare-bones hybrid set up in a normal car that doesn’t drive as well. Hypercars like the McLaren P1 have shown us what Hybrid technology is capable of. Bringing that technology down to affordability and practicality doesn’t have to be so uninspiring.