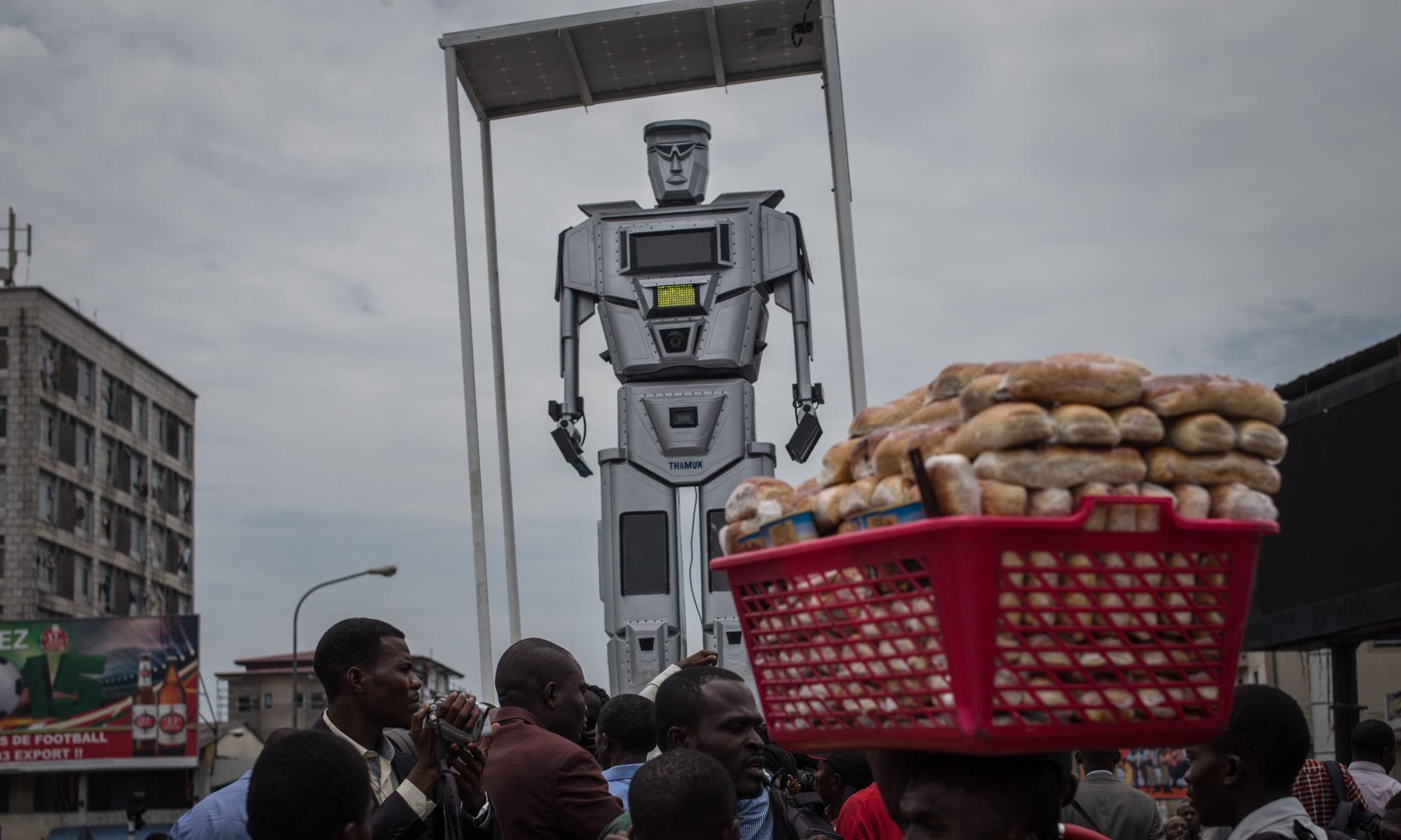 Can giant robots with a booming voice and monstrous arms be the solution to traffic disorder? It's already happening in the DRC.

A small group of engineers, which built up the novel solution and is trying two robots at key junctions, thinks this is the way to go - and needs to advance the idea nationally, Africa and the world.

The feedback so far is positive, from both the public and authorities.

"God bless the people who developed it," said taxi driver Franck Mavuzi stuck in traffic. "The robot is great."

Like other African capitals, Kinshasa, a city of 10 million individuals, has a notoriety for crazy driving and enormous traffic gridlocks. Tricolor traffic lights are uncommon, numerous cars are old and battered and not all drivers are aware of the Highway Code.

What's more, traffic police, who are paid peanuts, are frequently blamed for extorting cash from drivers.

"When the robot stops the traffic you can see that car stops and the pedestrians can cross without a problem," said cabbie Mavuzi.

"The traffic police trouble us excessively. How about we leave robots to do the job?" he said.

The first model, which towers 2.5 meters tall, was installed last June at the bustling Lumumba Boulevard in the focal Limete region.

"Drivers, give way to people on foot!" it blasts, raising one arm and bringing down another while blazing red and green lights signal for cars to stop or go ahead.

"We started with this one, which is basically there to offer safe passage" to people on foot, said Therese Ir Izay Kirongozi, who established Women's Technology to create jobs for Congolese women with engineering degrees.

Her seven-member group builds up the robots in a little workshop with peeling walls and simple equipment.

In October, a more complex model intended to control traffic flow was installed at an intersection in front of parliament.

Underneath a solar panel is the source of power, the robot swivels its torso. A green light on its breastplate turns red while it raises an arm, also fitted with lights - mimicking live movement of a policeman halting one line of traffic and letting another through.

"There are numerous robots on the planet, however a robot taking care of road safety and traffic control, that is genuinely 'Made in Congo'," Kirongozi said.

"We must pitch our invention to other nations in Africa, and why not the United States, Europe and Asia," she stated, trusting the venture can create more job opportunities in the vast DR Congo where development has been hampered by recurring fighting, notable in the volatile east.

The group is due to showcase their creation at global exchange fairs in Canada and Switzerland in April.

She's currently financing the entire project from her other businesses yet she trusts the robots will in the end turn a profit.

"This is a positive thing ... in matters of road safety," said Val Manga, leader of the National Road Safety Commission. "We have to increase these whiz robots to install them at different crossing points in the towns and urban agglomerations of our nation."

The solar panels that power the robots could demonstrate a major resource in a city where entire areas still lack electricity. Made of aluminum, the robots are intended to withstand cruel tropical climate with high temperatures, humidity and heavy storms.

An advanced electronic detection system informs the robots pedestrians are waiting to cross a road. Cameras built into its eyes and its shoulders give constant video caption of traffic flow.

"When the robot takes photos, they are sent over the Internet to a central location where they are preserved and could be utilized to arraign individuals who have committed offenses," said video surveillance expert Claude Diasuka who is a member in the venture.

Considering the amount of cash collected by Western nations for driving offenses, Kirongozi said such a system here could ensure profit for groups that want to invest into the robots.

In Kinshasa alone, "we have earmarked 600 hazardous junctions and black spots" where robots could be assigned, she said.