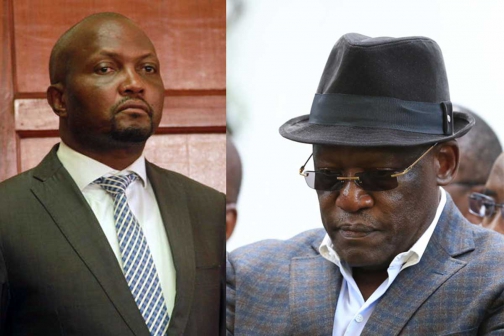 Controversial Gatundu South MP Moses Kuria has been arrested over hate speech claim and is being held at DCI headquarters along Kiambu road.

His arrest come a few days after a video of him addressing a gathering in Kiambu emerged. Posted on his social media, he had said that he would launch a manhunt in Kiambu County to smoke out 70, 000 voters who voted for NASA leader, Hon Raila Odinga.

His verbiage was meet with fury as Kenyans urged the authorities to take action on the law maker. They expressed their displeasure with the sentiments of the legislator who represents Uhuru Kenyatta’s Gatundu constituency.

Earlier today the MP said he was disappointment after NASA allegedly refunded his Sh5 that he had contributed to the opposition’s pay bill campaign.

Also caught up in the string of arrests is former Machakos Senator Johnstone Muthama who was arrested by police in Kangundo over hate speech allegations and is in transit to Nairobi.

It is not the first time that the two politician have been arrested over hate speech allegations. Moses Kuria was locked up for a several days earlier in the year after remarks that were said to be inflammatory. He was however acquitted of his hate speech charges in April 2017 .