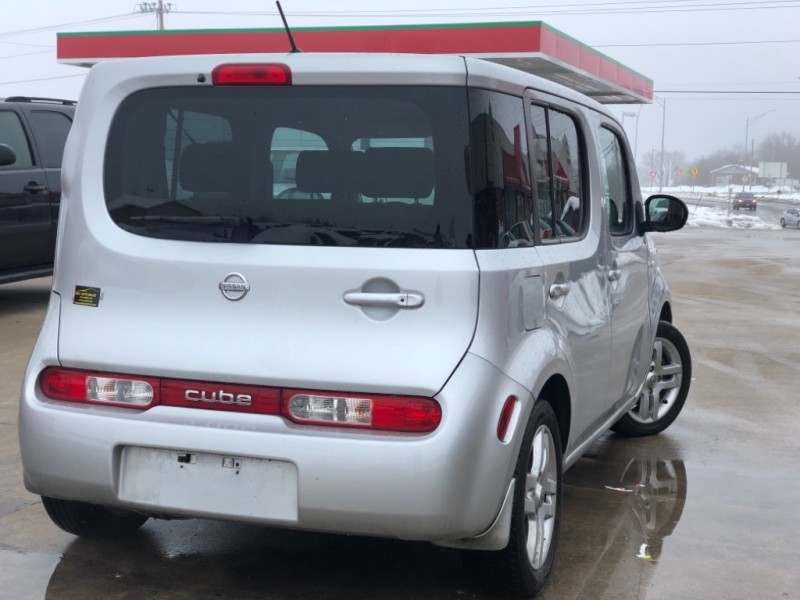 In order to separate itself from the competition, the Nissan Cube possesses such unique features as asymmetrical wraparound side/rear windows with invisible passenger-side C-pillar, a rear door that swings open refrigerator-style, and a lounge-like cabin that offers a reclining rear seat and a headliner with a concentric circle design.

The Cube is underpinned by Nissan’s global B-platform, which also serves as the basis for stablemates Versa hatchback and Juke compact crossover. A peppy 1.8-liter 122-horsepower I-4 is mated to either a six-speed manual or continuously variable transmission (CVT). Performance takes a backseat to style and functionality; thus, the Cube features a not-so-sporty torsion-beam rear suspension, rear drum brakes, and standard 15-inch wheels.

Having been on the market for four years now, the Cube will likely benefit from a mid-cycle refresh in the next year or so. For 2012 though, the quirky hatchback is mostly unchanged, though an option package is added for the 1.8 S with CVT. That package includes Nissan’s hard drive-based navigation system with five-inch touch screen, rear-view camera, Nissan Intelligent Key entry and push-button start, Rockford Fosgate premium stereo, a unique seat color, and 15-inch alloy wheels. Nissan Intelligent Key is now standard on SL models, as is an attached front passenger armrest on S and SL models. The Krom Edition is gone for 2012, though five new exterior paint colors will be available.

Though boxy was made cool again by the Scion xB way back in 2004, Nissan’s take on that styling trend makes the 2012 Cube unique to say the least. Its bulbous front end makes the car look rounded, even though it’s clearly box-shaped when viewed from the side. In fact, every corner seems to be rounded, leaving no sharp angles anywhere on the car. The wraparound side/rear window and invisible passenger C-pillar is a unique styling trick, though some may find its uniqueness a bit too much for their tastes. Base and 1.8 S models roll on 15-inch steel wheels with wheel covers, while 1.8 SL models get standard 16-inch alloys. A variety of optional alloy wheels are available, and each lends a touch of personalization to the Cube. Other aesthetic enhancements available include a rear roof spoiler, custom front grille, and an aerodynamic kit with bespoke side sills and chin spoiler.

Inside, the overall feel of the Cube’s cabin is very lounge-like, with a sofa-style rear bench seat that reclines, and wavy themes repeated in the headliner, seats, and doors. Electroluminescent gauges are standard, as is a six-way manual adjustable driver’s seat and 60/40 split rear bench seat. Base models get standard cloth upholstery, while higher trims receive premium cloth seats. Nissan’s hard drive-based navigation system with five-inch touch screen is available through various packages, along with a rear-view camera and Rockford Fosgate premium stereo system. The Nissan Intelligent Key system now comes standard on SL models, and allows the driver to lock and unlock the car with a button on the door handle, while also facilitating a push-button ignition.

With a 1.8-liter I-4 engine producing 122 hp and 127 lb-ft of torque, the sub-3000-lb Cube scoots along well enough, though it won’t win many drag races. In a 2009 comparison test, we said, “The Nissan is surprising, perhaps because I didn’t expect much. It had no problem passing traffic and superseding the freeway speed limit.” That particular comparison test also included, as you might expect, the Scion xB and Kia Soul. Though the Cube’s polarizing styling put the car in last place among its box-shaped contemporaries, the Cube was overall well-liked for its lively driving dynamics. A six-speed manual comes standard on 1.8 and 1.8 S models, while a CVT is standard on the 1.8 SL and available on all other models.

READ  Lexus LS: one of the most engineered luxury sedans