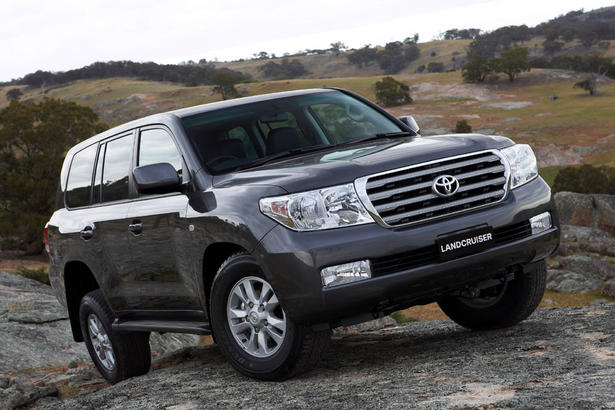 Now the V8 came to right the wrongs of the TX. Toyota claims offers more comfort and better handling, while retaining its renowned off-road ability.

The V8 replaces the Amazon – the smaller standard Land Cruiser continues unchanged – and the first thing that strikes you is its humongous size. At five metres long and two metres wide, it’s a real monster. However, the boxy profile remains, and the V8 looks a little dated alongside more stylish offerings.

Hit the road, and it certainly doesn’t shrink around you – you’re constantly aware of how big it is, and it seems out of place in towns and on country lanes. Twisting roads also highlight the Land Cruiser’s major shortcoming – its handling. Toyota spent five years developing the model – the frame is 40 per cent stiffer than before, and it features adaptive suspension designed to minimise pitch and body roll.

Even so, the steering feels vague, especially at the straight-ahead. The ride is silky smooth, though, and it’s happy covering motorway miles with minimum fuss and maximum comfort.

But the Land Cruiser is most at home on rough ground. Here it really shines, illustrating that a luxurious off-roader can also be a capable 4x4. The V8 soaks up bumps with ease, and its body control over extreme terrain is excellent. With 225mm of ground clearance, the Land Cruiser should be able to deal with most things you throw at it.

While a 0-60mph time of 8.2 seconds is impressive. The unit is smooth and unintrusive, and the six-speed auto offers quick changes.

However, there is one stumbling block – the price. The Land Cruiser is more expensive than a BMW X5 diesel or the entry-level Range Rover TDV8. It’s well equipped, but the Toyota can’t match the kudos or on-road dynamics of either rival.

RIVAL: Mercedes GL420 CDI
The big Merc is beaten by the Toyota in the rough stuff, but still has plenty to offer. The GL is also far more composed on tarmac, but you do have to pay a premium for the three-pointed star, and it’s not as well equipped.