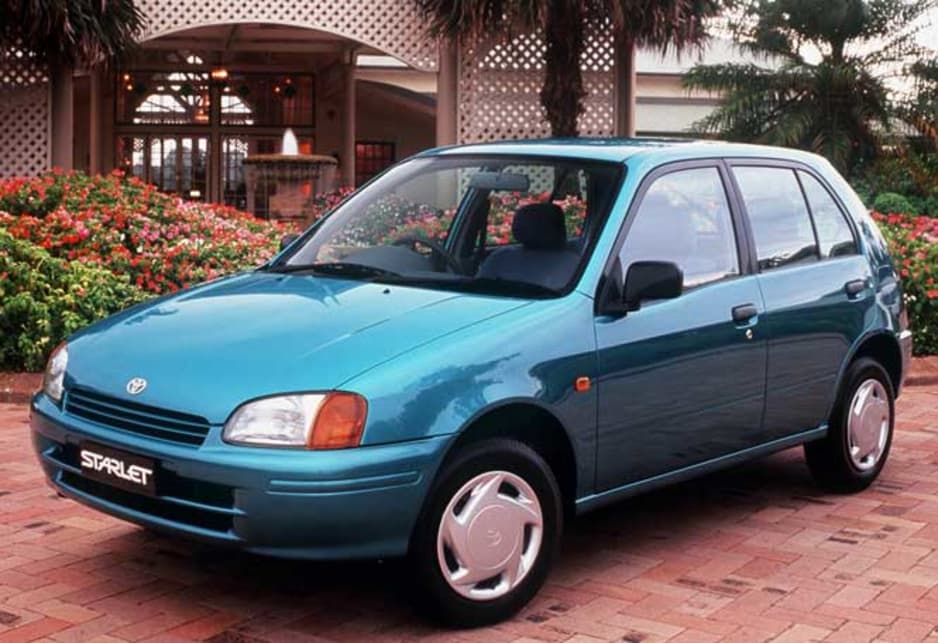 While its styling wasn’t anything to write home about, the Toyota Starlet was rather plain in the way of most Japanese cars at the time, it was inoffensive, even pleasant to a market that can easily be spooked by anything even slightly radical.

The real appeal of the Starlet was the assurance of quality and reliability that came with the Toyota badge.

Toyota offered two body styles, both hatches with either three or five doors, with a choice of three models offering a range of standard equipment.

All had a nippy 1.3-litre 16-valve four cylinder engine which delivered good performance for the class. It pulled well, had plenty of punch for overtaking and good fuel consumption.

There was a choice of a five-speed manual gearbox and an auto. The auto was an extra cost option and, disappointingly, was only a three-speed.

The three-door was the price leader, and boasted standard features like a headlights ‘on’ reminder, intermittent wipers, and a radio/cassette sound system with two speakers.

At the top of the model range was the five-door Style which, as well as the Group X features, had power steering with tilt adjustment for the steering column.

A new model was introduced in 1998 with 13-inch alloy wheels, a CD player and a rear sun shield as standard equipment.

There were few criticisms of the Starlet when it was launched. The rear seat room was thought to be insufficient, suitable for a couple of kids or smallish adults. It would definitely be too tight for a couple of adult 'momo' types, but then it was unlikely you’d ever find a 'momo' in the back seat of a car called a Starlet.

There was also some criticism of the size of the boot, which was said to be too small, but apart from those complaints the Starlet was quite highly praised.

The renowned Toyota build quality shone through. Doors closed with a solid ‘thunk’, panel gaps were even, and the paint finish was deep and lustrous. Inside the quality was equally obvious with the fit and finish of the plastic trim components.

On the road the Starlet drove with the assurance of a much bigger car, with a comfortable ride and secure handling. Performance was on a par, or better, than the competition in the class, with impressive low down grunt that made for zippy response in city traffic, and effortless cruising on the open road.

Start with the usual suspects when looking at a Starlet. Uneven body gaps, overspray and mismatching paint on adjoining panels are signs of body damage.

Look for signs of abuse or lack of attention. Being relatively new still there is little likelihood of major wear showing up on interior trim, but look anyway. Check driver’s seat, which will be worn more than the other seats due to greater use, and the carpet under the driver’s feet.

Check for a service record. As evidenced in the recent revelations about stolen 'white Toyotas' being taken apart somewhere in Kiambu and then easily rebirthed.

A service record becomes even more important, particularly if you are buying from a private seller. A service record can give you a picture of the mileage accumulation of the car.

Mechanics record the mileage of the car when they service it so the record will show the pattern of mileage through the life of the car. It can be quite reassuring to see that the mileage has grown at a steady rate that would take it to that shown on the odometer at the time you inspect it.

A service record also gives you some clues on who to talk to when you find out more about the life of the car you’re about the spend your hard earned cash on.

Mechanics have a high regard for the Starlet, and report few faults with it. Serviced according to the manufacturer recommendations, mechanics say a Starlet will do 300,000 km-plus without any major problem.

Major service item is the cam-timing belt that should be changed every 100,000 km. As the engine is a free-spinning design no internal damage will occur if the belt breaks in service, but of course you will be left stranded in the forest if it does.