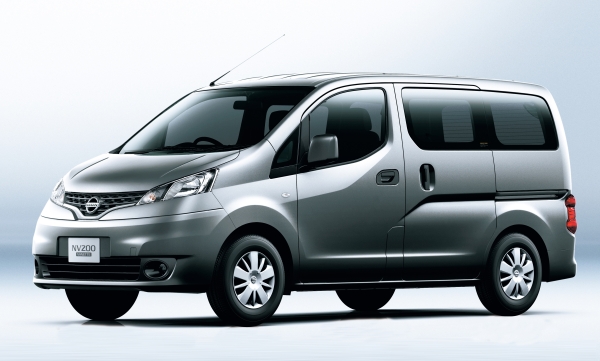 Like all vans, the NV200's priority isn't much about the speed or power. It's the versatility and space that attract buyers and small business owners alike.

To begin with, the van has a compact dimension - 4.4 metre long, 1.86 metre tall and 1.69 metre wide. With measurements like this, the vehicle is a do-it-all magic box because its compact size gives no indication to the considerable interior passengers and load carrying space it offers. Not till you load up its trunk will you realise the potential this van has.

The NV200 is a useful choice and with a cargo space like that, Nissan may have just created a top-selling van with limitless possibilities.

Throughout the creation of NV200, attention has been paid to ensure the highest levels of quality with shut lines and panel gaps go in line with the expectations of passenger car buyers. It has a 524mm cargo floor height, which is the lowest in its class, allowing business owners to load and unload goods with much ease.

The front facade is thick and huge, while headlamps are swept backwards in an elegant manner giving it a swank and muscular appearance. The large air intake fills up the front bumper and is accompanied by clear rounded fog lights on either side, presenting the van with a touch of style.
READ  Why does Subaru spell "Urabus" (you are a bus) backwards?

In terms of entry and exit design, the NV200 comes with a pair of ordinary sliding side doors as standard along with the usual side-hinged doors at the rear.

Rear: Despite the very ordinary square look like most vans, this one seems bigger and taller. This isn't exactly a bad thing, given the fact that more things can be fitted in which is the primary responsibility of the NV200. Rear lights are interestingly shaped and the prominent chromed NV200 logo shines proudly.

There are more visually arresting small vans on the market than the NV200 but once the scaled down van design was settled upon, it seems destined to be a vehicle of the plain and practical persuasion.

The inside of the NV200 has a feel of simplicity throughout - especially the JVC stereo system - meaning it's easy to handle and it gets the job done of listening to music. However, simple as it may seem, an AUX-in option comes standard, which is greatly appreciated. Somehow, a simple-looking dashboard seems acceptable, considering the nature of the vehicle, but not for a dull-looking steering wheel. Similarly, dark grey colour throughout the cabin somehow makes the interior a depressing place to be.

Another feature that's hard to miss is the signal. Unlike the usual Japanese make, the signalling on this NV200 is on the left instead of the right. Apparently it's because the vehicle was designed in UK but assembled in Japan. Hence the difference when compared to other Japan made vehicles.

Nevertheless, the driver's seating position as well as ample storage space makes up for the misgivings.

The driver's seat is perched up high, which makes visibility very good while the seats offer plenty of support, making it comfortable for long journeys. It gives excellent views of the road ahead and makes the NV200 feel bigger than it really is. Both driver and passenger get a cupholder on the dash as well as in the central console, while there is a fairly generous storage space on the dashboard which is ideal for keeping files and paperwork. The only downside of it is that it has no lid, meaning your paperwork is left on display.
READ  Honda CR-V Review

Similarly to the front cabin, a spacious cargo area is an understatement.

The available space in the load area is impressive for a small van like the NV200 and gives it an edge over similar vehicles in the market. It boasts an impressive 4,200 litres of cargo space, a payload of 752kg and has rear doors that open up 180 degrees wide, which allows two pallets to fit in easily.

Driving Experience
Light steering and a precise five-speed gearbox make the NV200 ideal for driving in built up areas and narrow streets. Tight turning radius of 5.5 metre also makes it perfect for getting out of tight squeeze. Body roll is evident in the NV200.  It's extremely quiet on the road with very little wind and engine noise, even at higher speeds, given the fact that it's a compact van.
Overall, this 1.5-litre box engine is a pretty good drive. With a maximum power and torque of 85bhp at 3750rpm and 200Nm at 2000rpm respectively, the NV200 is no feeble van. It is flexible and responsive throughout the rpm range.