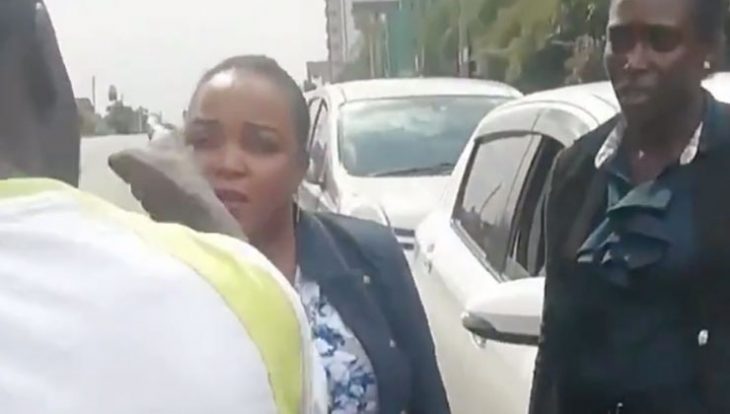 Overlapping Kirinyaga County Women Rep has apologised after being publicly shamed by an angry citizen.

The incident shows Ms Ngirici standing next to her car which is on the wrong side of the road (SEE VIDEO).

According to an eyewitness, who identifies himself as Oluoch Dickens, the incident took place at Kilimani area.

During the incident, the Woman Rep’s vehicle is said to have almost hit another one coming from the other direction.

“A woman out from the back seat and accompanied by a woman and man who looked like her body guards came out and she started insulting a female driver demanding that she comes out of the car. She was very abusive. I was in a lot of pain having undergone an operation and had just been discharged two days earlier from Aga Khan Hospital but I couldn’t just take it,” said Mr Oluoch.

“I asked my umber guy to stop. Struggled to come out of the car and confronted her and her team… I didn’t know who the hell she was but could put that face to a noisy politician. Couldn’t just tell who. She and her team tried to confront me but I stood my ground though in a lot of pain and didn’t allow them to know. She had to retreat and ate a lot of humble pie,” he added.

Ms Ngirici admitted her mistake and apologised for her misconduct.

“Going by the clip making rounds on social media – Yes, sometime back I had an incident involving overlapping on the road. Sometimes, even leaders are reminded by the citizens about the society and its values,” Ngirirci said.

“I took the lesson, appreciated and apologized accordingly. To grow together as one cohesive and harmonious society, we must remind and correct each other whenever we go wrong or make mistakes ~ PWN,” she added.