How to convert your car to run on cooking gas @KenyanTraffic 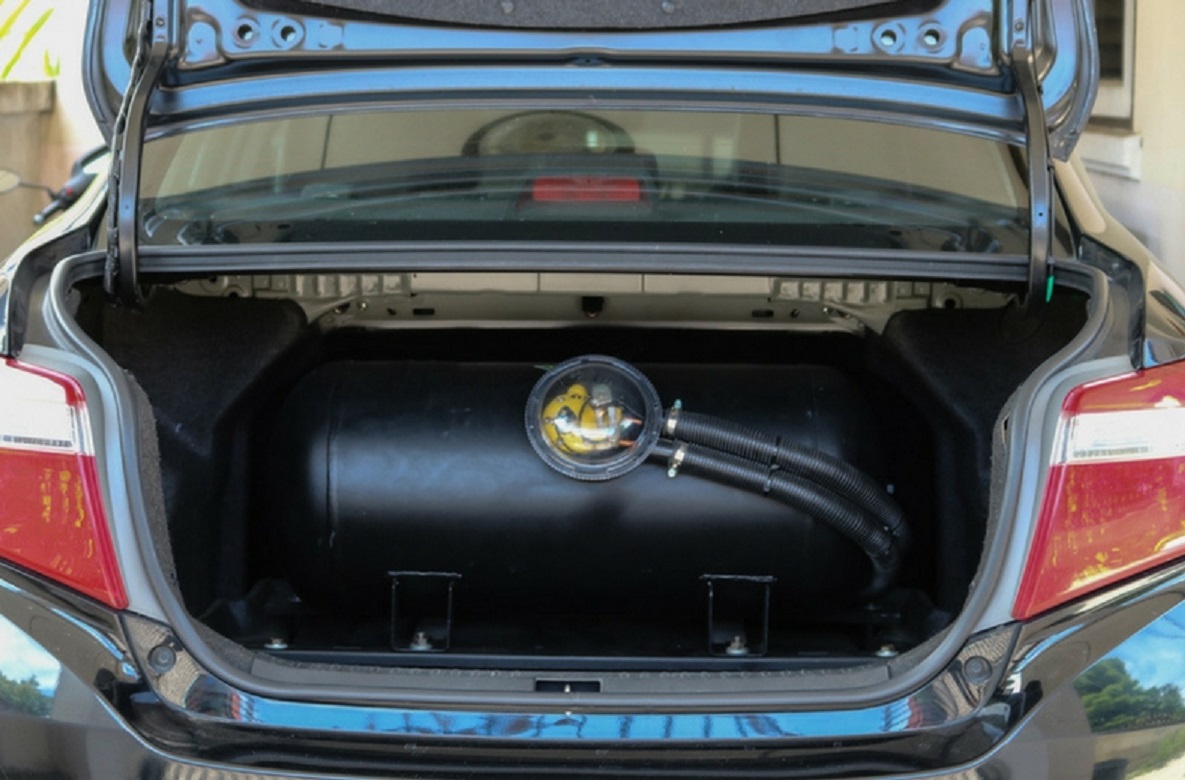 LPG autogas is an energy source that is recovered from natural gas deposits or from the refining process of crude oil. It is supplied and stored under relatively low pressure and at ambient temperature in liquid form. It changes from a liquid state to gas as it passes through the converter on its way to the engine in your car. LPG autogas conversion works in exactly the same way as a normal petrol(diesel) engine, only the conventional fuel is replaced with autogas LPG. Everything about the vehicle remains the same but a separate autogas fuel system is added. Converted vehicles become “dual-fuel” - you can change between running on petrol (diesel) or LPG autogas, even while on the move. LPG autogas tank constructed from steel is fitted in the boot. It is fitted with a multi valve(multiple solenoid cut-offs) which are designed to disable the system if there are any gas leaks.

Unlike petrol LPG enters your engine as a completely vaporized fuel that's free from lead, carbon, gum, sulfur and most pollutants. LPG won't foul your car's plugs, ruin its valves, contaminate its oil, wash down its cylinder walls and rings, burn out its muffler. It does not pollute the air we all breathe. And while mileage and performance are about the same as with petrol, cost per litre of LPG generally runs about 15% less than you've been paying for petrol.

So what are the disadvantages of this low-polluting system? First, it'll cost you something over Ksh 80,000 (including everything) to do your conversion a bit of money even when you consider that the equipment will transfer readily to your next vehicle. Second, filling up an LPG tank simply isn't as convenient as stopping at a petrol station, the only filling stations I know is  Hashi Petrol stations. However, can use the other half of my dual system and switch over to petrol until you fill your LPG tank again.

Although the technology is pretty uncommon in Kenya, there's absolutely nothing new about LPG conversion. Around the world equipment for conversion has been around for over 40 years and more than 1,000,000 vehicles-mostly trucks, cabs and forklifts—are currently operating on LPG. The hardware is well proven.

You'll need several pieces of equipment to convert your car to LPG.

Filler
The fuel is transferred into a vehicle tank as liquid by connecting the bowser at the filling station to the filler fitting on the vehicle.

Adaptors allow a vehicle fitted with a particular system to refuel at a station equipped with another system are available.

The fill valve contains a check valve so that the liquid in the line between the filler and the tank(s) does not escape when the bowser nozzle is disconnected.

In installations where more than one tank is fitted, T-fittings may be used to connect the tanks to one filler so that the tanks are filled simultaneously. In some applications, more than one filler may be fitted, such as on opposite sides of the vehicle. These may be connected to separate tanks, or may be connected to the same tanks using T-fittings in the same manner as for connecting multiple tanks to one filler.

Fillers are typically made of brass to avoid the possibility of sparks when attaching or removing the bowser that might occur if steel fittings were used.

The flexible hose between the converter and mixer is called the vapour hose or vapour line. This line carries vapour at low pressure and has a much larger diameter to suit.

Where the tank valves are located inside an enclosed space such as the boot of a sedan, a plastic containment hose is used to provide a gas-tight seal between the gas components and the inside of the vehicle.

Liquid hoses for LPG are specifically designed and rated for the pressures that exist in LPG systems, and are made from materials designed to be compatible with the fuel. Some hoses are made with crimped fittings, while others are made using re-usable fittings that are pressed or screwed onto the end of the hose.

Rigid sections of liquid line are usually made using copper tubing, although in some applications, steel pipes are used instead. The ends of the pipes are always double-flared and fitted with flare nuts to secure them to the fittings.

Liquid line fittings are mostly made from brass. The fittings typically adapt from a thread in a component, such as a BSP or NPT threaded hole on a tank, to an SAE flare fitting to suit the ends of pipes or hoses.

Vehicles are often fitted with only one tank, but multiple tanks are used in a some applications. In passenger car applications, the tank is typically either a cylindrical tank, made from steel, mounted in the boot of the vehicle or a toroidal tank (also steel) or set of permanently interconnected cylinders placed in the spare wheel well. In commercial vehicle applications, the tanks are generally cylindrical tanks mounted either in the cargo space or on the chassis underneath the body. Increasingly, the tank is an aluminium Conformable Tank, which is lighter, has more capacity and cannot rust.

Valves
There are a number of types of valve used in autogas systems. The most common ones are shut-off or filter-lock valves, which are used to stop flow in the service line. These may be operated by vacuum or electricity. On bi-fuel systems with a petrol carburettor, a similar shut-off valve is usually fitted in the petrol line between the pump and carburettor.

Check valves are fitted in the filler and on the fill input to the fuel tank to prevent fuel flowing back the wrong way.

Service valves are fitted to the outlet from the tank to the service line. These have a tap to turn the fuel on and off. The tap is usually only closed when the tank is being worked on. In some countries, an electrical shut-off valve is built into the service valve.

Where multiple tanks are fitted, a combination of check valves and a hydrostatic relief valve are usually installed to prevent fuel from flowing from one tank to another.

Converter
The converter (also known as vaporiser or reducer) is a device designed to change the fuel from a pressurised liquid to a vapour at around atmospheric pressure for delivery to the mixer or vapour phase injectors. Because of the refrigerant characteristic of the fuel, heat must be put into the fuel by the converter. This is usually achieved by having engine coolant circulated through a heat exchanger that transfers heat from that coolant to the LPG.

Vapour phase injectors
Most vapour phase injection systems mount the solenoids in a manifold block or injector rail, then run hoses to the nozzles, which are screwed into holes drilled and tapped into the runners of the intake manifold. There is usually one nozzle for each cylinder. Some vapour injection systems resemble petrol injection, having separate injectors that fit into the manifold or head in the same manner as petrol injectors, and are fed fuel through a fuel rail.

Electrical and electronic controls
In most modern installations, an electronic device called a tachometric relay or safety switch is used to operate electrical shut-off solenoids. These work by sensing that the engine is running by detecting ignition pulses. Some systems use an engine oil pressure sensor instead. In all installations, there is a filterlock (consisting of a filter assembly and a vacuum or electric solenoid operated shut-off valve) located at the input to the converter.

Valve protection
Many LPG equipment installers recommend the installation of so-called valve protection systems. These can consist in the most simple case of a bottle containing valve protection liquid. The liquid is drawn into the air intake system and distributed into the engines' cylinders along with the fuel and air.

More sophisticated systems can consist of a piggyback ECU that is synchronised with the LPG injector ECU. This results in a more precise injection of valve protection fluid.

READ  What should you do when your car won't start?