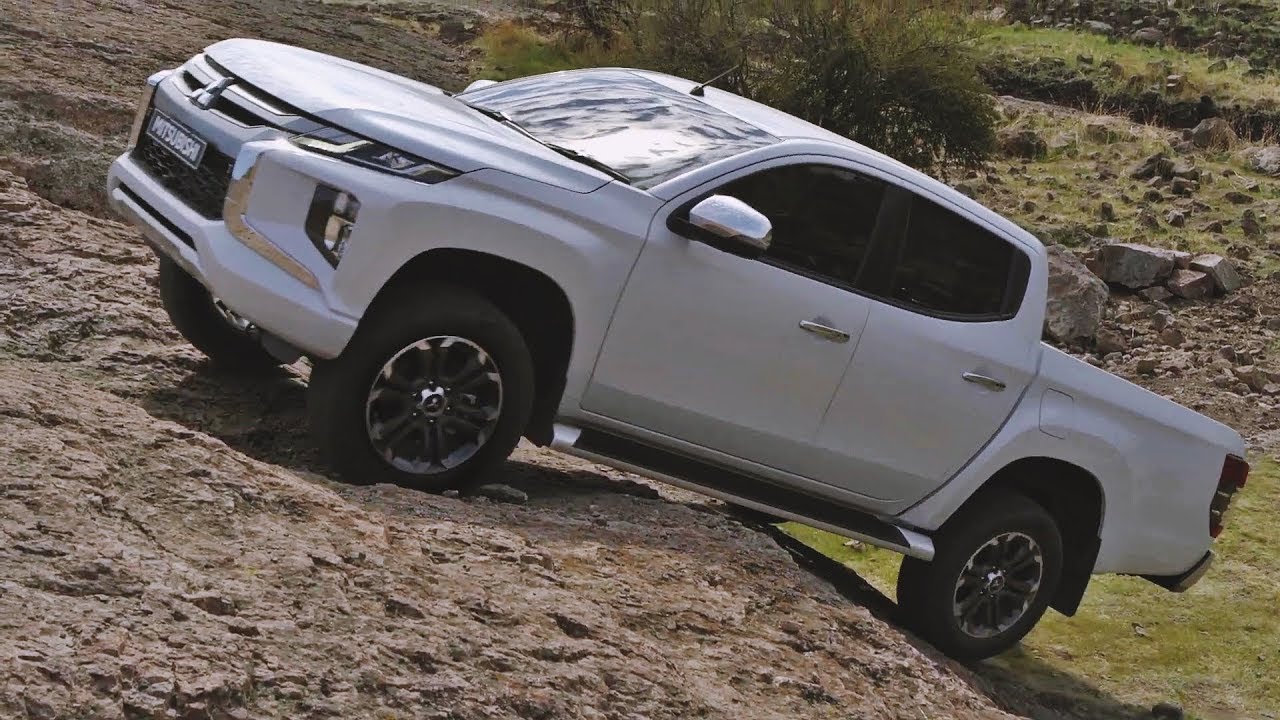 Buy a Mitsubishi L200 pick-up and  you get a working vehicle that can rival an SUV for kit and interior space, and running costs aren't much different, either.

The L200 has a number of tough rivals in the pick-up truck sector, including the Toyota Hilux, Nissan Navara, Isuzu D-Max, Ford Ranger and Volkswagen Amarok.

Of course, as it's primarily a work vehicle, the L200's MPG and parts costs will need to be considered. Fuel economy of 39.8mpg is quoted for the manual Double Cab model, while the auto has a claimed average of 37.7mpg. In reality, users can expect around 30mpg economy in everyday driving, while a 75-litre fuel tank means you can expect a range of around 500 miles between fills.

Thhe L200, a 2.5-litre four-cylinder diesel engine is rated at 181PS (178bhp) in the Double Cab variants, and is offered with either a 6-speed manual or 5-speed auto gearbox. The engine itself is relatively smooth when compared to some rival models, while the gearboxes make good use of the power available.

Like all pick-up trucks, the L200 can carry a payload over 1 tonne.

The Mitsubishi L200 gets an advanced common-rail turbo diesel engine with MIVEC variable valve-timing, an aluminium cylinder block and lots of other weight-saving design features. It's a remarkably high-tech unit to find in a pick-up truck and it delivers some very strong fuel economy figures with a 40.9mpg combined economy figure. The higher spec derivatives aren't far behind with 39.8mpg provided you choose the manual gearbox. Go for the 5-speed auto and the combined cycle performance drops off to 37.7mpg but that's still better than many rivals can muster, even in their greenest manual guise.

A 75-litre fuel tank isn't quite as big as you'll find in a VW Amarok or Ford Ranger (both have 80-litre tanks), but these two are powered by thirstier V6 and 5 cylinder diesels respectively, so you'll still be filling the L200 less frequently than its rivals.

The L200 is built to be tough and to deliver minimum repair and maintenance costs.

The overall dimensions of the L200 are a little more compact than many of its key rivals, particularly in terms of width. The double-cab truck measures in at 5,285mm long and 1,815mm wide, making it 134mm narrower than a Volkswagen Amarok and 45mm narrower than an Isuzu D-Max. Despite this, it doesn't really give anything away in terms of capacity.

The open load bay on the back of the popular double-cab L200 is 1,470mm square with a depth of 475mm. There are six load lashing points and grooves cut into the load bed so it can be divided up to separate cargo. A step is cut into the rear bumper on higher spec models and a new tailgate mechanism is designed to prevent the gate falling down when unlocked, a hazard common on other pick-up models.

The maximum payload capacity is 1,050kg for the automatics, just 5kg less for the manuals. Owners needing to shift more stuff can attach a braked trailer of up to 3,100kg in weight on double and extended cab models or 3,000kg for the single cab. Mitsubishi claims that this lets the L200 achieve a total trailer and payload carrying capacity of 4,090kg, a figure that no rival can match.

Mitsubishi offers a variety of load bed covers to suit most needs. There are hinged hard covers that open on gas struts, and the ubiquitous roll-top cover, while both can be specced to fit trucks with or without roll hoops. Truck tops can create a vast load area, although they do tend to make it harder to see out of the back - so it's hand that most L200s come with a reversing camera as standard.

The L200 is built to be tough and while that means it doesn't compare particularly well to big passenger carrying SUVs in terms of comfort and sophistication, it should make for a vehicle you can trust. The latest model features a more extensively reinforced chassis with more substantial joints between the frame, load bay and cabin.

Lane-departure warning is standard on some trims. However, this manifests tiself as a beep from the dashboard when you change lanes without indicating, and can be rather irritating after a while. And it comes on automatically every time you start the truck.

The level of safety equipment provided as standard across the rest of the range is extremely good for the pick-up class, with the L200 offering many advanced active safety features that we're used to seeing on passenger cars, but haven't quite made it to the world of the pick-up before.

The stability and traction control system can brake individual wheels to correct understeer and oversteer while diverting power to the wheels with most grip. There are seven airbags, an adjustable speed limiter and Trailer Stability Assist is included as standard too, an extension to the stability control system that adjusts its responses if a trailer is attached.

Then there's Hill Start Assist and hazard lights that flash if you brake hard, but the previously mentioned lane departure warning system and Bi-Xenon headlamps are only on the higher spec models. There's no hill descent control, either, although the L200's Super Select 4WD with low-range gears are there to deal with more intensive off-road driving.

The 2.5-litre MIVEC diesel engine made its debut in the fifth generation L200 and is a much higher-tech unit than we've been used to seeing in pick-up trucks. Common-rail injection, variable valve timing and aluminium construction all help to give this unit an edge on performance and efficiency grounds.

The engine comes in two states of tune with the entry-level derivatives getting a 151bhp version with 380Nm of torque but all other models getting 178bhp and 430Nm.

Performance is brisk in the higher-powered engine with a 0-62mph time of 10.4s while the lower powered option has a 12.2s sprint time that's closer to the average for the class.

The other key difference between the entry-level L200 and the top spec versions is the 4x4 system. Base models get the Easy Select part-time 4x4 set-up that can be engaged manually when required and features a locking rear differential. Higher spec L200s get the Super Select active 4x4 system from the Shogun SUV. It can be set in rear-wheel-drive or four-wheel-drive modes for on road driving with the 4x4 mode automatically sending power to the wheels with most grip. It maintains a rear-biased 60:40 torque split under normal driving to help reduce understeer on the road. There are then two further off-road modes with the centre differential locked and either high or low range gearing for the really rough stuff.

The L200 has real off-road ability built in but it's the on-road performance that's going to be more relevant to most buyers. Compared to the other options in the pick-up sector, the Mitsubishi is very competent on the tarmac with the latest version putting up a valiant fight against the bouncy ride and sloppy handling that tend to afflict models in this market.

The ride is noticeably more composed than we've been used to in market pick-ups and lateral roll in corners is also kept comparatively well in check. The L200 can still be upset buy bumpy surfaces and big craters send shudders through the cabin but on good roads the ride is comfortable enough. Refinement is also strong, the engine rumbles on start-up but this subsides as it warms up. There's still a loud growl under throttle but it suits the L200's character, you wouldn't really want your pick-up truck whispering away like a luxury saloon. At 70mph on the motorway, the engine is sitting at around 1,500rpm and the engine is barely audible, through there is a fair bit of road noise.

The steering has been given a useful bit of weight and it feels more responsive around the straight-ahead than the majority of pick-ups. The gear change on the 6-speed manual version too is more precise than the old L200 and shorter throw too. The 5-speed paddle shift automatic that's also offered works well and suits the relaxed driving style that's best adopted in the L200.

The cabin of the L200 is spacious and durable. Some of the minor switchgear is dated and the plastics quality wouldn't stack-up well in passenger car company, but the materials are adequate for the pick-up market with some nice detailing thrown in. The neat Super Select 4x4 control dial sits behind the gear lever and there's a clear instrument cluster with a clear display showing you which drive mode you're in. A large touchscreen sits in the centre of the dash on higher spec models but it does look a bit too much like an after-market addition.

Passenger space is fine with plenty of headroom and space for a six-foot adult to sit comfortably behind a similarly sized driver, but the low seating does mean they have to bunch their knees up a bit. Storage space is limited to a bin between the front seats, some narrow door pockets and a glovebox that can take the manual but little else.

The top-spec L200 comes as standard with Mitsubishi’s seven-inch touchscreen infotainment system. Functionally, it’s on par with its pick-up truck competitors, because sat-nav, Bluetooth and DAB radio are all fitted as standard. You also get a six-speaker audio system, steering wheel media controls and USB connectivity.

The screen is larger than a VW Amarok’s small display, but smaller than a Ford Ranger’s, and it doesn’t look as modern as either. The interface is fairly simple; however, this third-party unit isn’t too advanced as the graphics feel a bit dated and the screen could be more responsive.