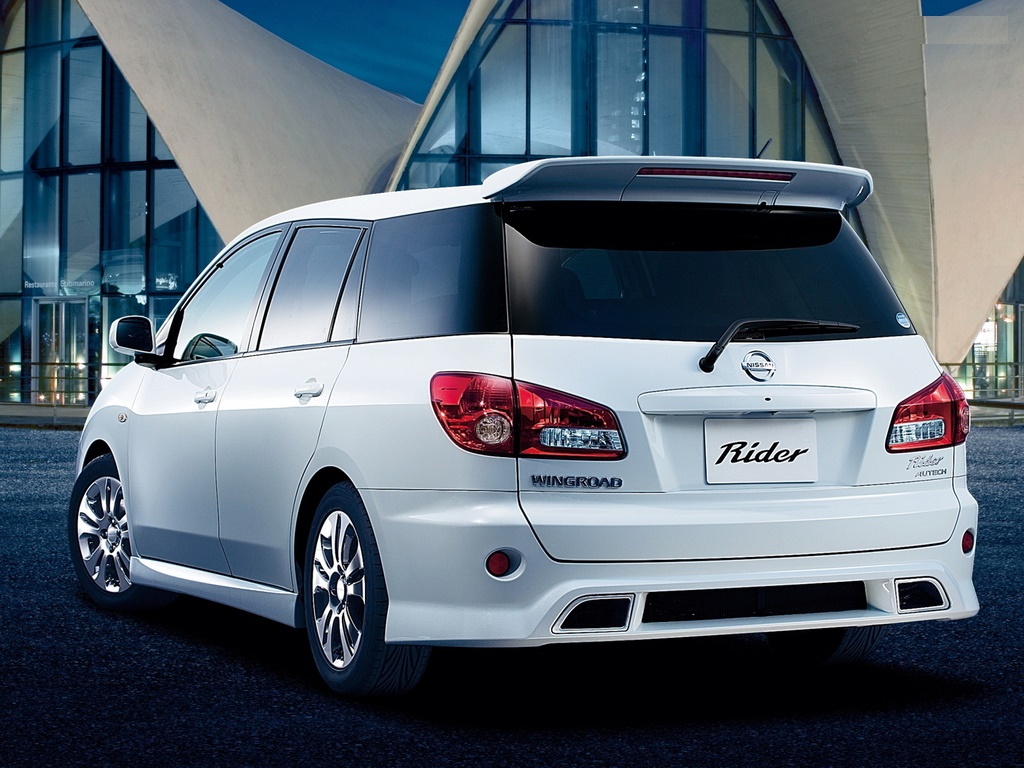 The Nissan Wingroad is a small size station wagon, which is directly comparable to the Toyota Corolla wagon(Toyota Fielder). It is a Japanese market model mostly imported by used car dealers rather than a locally-specified vehicle. A commercial version called the AD(Advan) is available, as well as Mazda and Mitsubishi badged versions. It is closely related to the Nissan Tiida.

Nissan has given the Wingroad an unusual look for a small wagon. The front has a low, sloped nose, while the rear is steep and rounded. The roof is mostly flat, although a step down in the windows makes it look like it tucks down lower. Rear windows are tinted and wrap around to give a pillar-less appearance.

The tinted windows make the car feel a little closed in and dark inside. The plastics feel hard and durable. The steering wheel is wrapped in leather and adjusts for rake. Gauges are easy to read against their white background and have a sporty look. The stereo is an aftermarket unit. Large door pockets and shelves running under the dash provide plenty of space for items. A handy 12-volt plug is on the passenger side shelf.

Front seats offer excellent side support, though the base is a little short so taller drivers may have a lack of under-thigh support. The rear seat can slide forward or backward by about 250mm to provide more storage or legroom. With the seat pushed back, legroom and headroom are excellent. Rear seating has only enough width for two adults to be comfortable.

The boot is large and practical, with room for six medium or three large tomato crates. The floor is slightly raised, and allows for two storage units beneath. One of these is removable and designed for wet items. Easy to reach tabs at the rear of the boot allow you to lower the sliding rear seat for additional space.

The Wingroad is powered by either a 1.5-litre or 1.8-litre four-cylinder petrol engine, while the AD version is available with engines as small as 1.2-litres. A CVT automatic transmission is standard, and four-wheel drive models feature a traditional four-speed automatic. In higher import models, you get paddle shifters which allow you to select from six set ratios in the CVT. Performance of our review car was good for a small wagon. The engine was impressively quiet when it got up to speed, although like most CVTs the engine revs high and can be a little buzzy when accelerating.

Ride and handling are decent. The ride is very flat, and most bumps are well absorbed by the suspension. The steering is very light and offers no feel - great around town, though not as good on twisty roads.

If you are not a master at parking you will want to find a Wingroad with a parking camera. The cameras were not fitted as standard, though are common in later-model import models. Tinted and narrow rear windows severely restrict vision behind. You can buy a camera to fit yourself or have it done by a kawaya.

The Wingroad has an average tow rating for a small car. It can pull 400kg unbraked (a small garden trailer), and 1,000kg braked (a small trailer boat).

In 2005 Japanese NCAP testing, the Wingroad received a full six-star rating for both driver and passenger protection. The model tested had front airbags only. In 2010 standard side curtain airbags were added to the higher models. Most Japanese import versions only have front airbags.

No ISOFIX child seat mounts are fitted. The centre seat features a lap belt, which is far less safe than the shoulder type.

The Nissan Wingroad has a reasonable reputation for reliability. As a wagon, many have been used as work vehicles, so how they have been treated may be a big factor. The engine uses a timing chain which will not require regular replacement.

In rare cases, the CVT automatic has been known to fail in cars that have driven over 100,000km. That’s primarily if the car hasn't been serviced enough, or incorrect fluids were used (and there are no early warning signs). Nissan Kenya sells the special NS1 CVT fluid recommended. If the CVT does fail, it will need a full rebuild or to be replaced with a second-hand unit. Either way it's usually never cheap in parts and labour. The four-speed automatic option is virtually unbreakable in cars that have not driven astronomical distances.

A knocking sound from under the front of the car over speed bumps or poor surfaces while turning can indicate worn subframe bushes.

Corrosion can also be an issue. When purchasing, check the seam that runs through the middle of the firewall under the lining, using a mirror. Also look under the car, especially the front lower cross member and rear subframe or suspension components. Look for discolouration and bubbling, and if you see it avoid that car as this is expensive to fix.

The light-grey seat fabric in the Wingroad appears to be a magnet for stains. We haven't seen many which don't have marks on the seats. A set of seat covers is an easy fix and a preventative measure.

Nissan recommends servicing the Wingroad every 12 months or 15,000km. With an extensive service due at 90,000km.

The Wingroad has a small 45-litre fuel tank. You may be able to travel up to 580km before the fuel light comes on.

The Wingroad continues to be available in Japan, so later model cars can appear in the market from time to time.